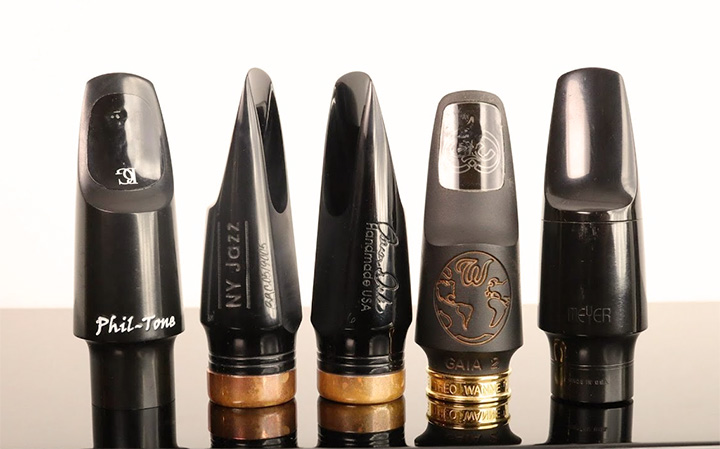 Many people have asked about finding the right saxophone mouthpiece and how to go about making their selection. There are so many variables when it comes to mouthpieces, and choosing the right sax mouthpiece can be very tricky. Since the mouthpiece is responsible for at least 75% of the sound a player will achieve, the selection is that much more important.

Simply put, the facing is the curve beginning from the break and ending at the tip rail, which is the thin end of the mouthpiece where the tip of the reed meets it when fastened to the mouthpiece. The reed is placed on the “table,” and it first separates from it at what is called the break. The facing curves vary quite a bit among different brands and the facing can determine what kind of resistance a mouthpiece can have as well as the response and ease of playing. Generally speaking, the shorter facings usually emphasize the higher registers of the saxophone, which can make it easier to respond.

In the beginning, a shorter facing can seem easier to play, but after a period of adjustment, they can be tricky and make it more difficult to play lower registers and to produce a good sub-tone. A longer facing cure produces a more resonant lower register as more of the thicker part of the reed is vibrating, and there is more resistance. The longer the facing curve is, it will feel as though the tip opening is a bit bigger than it really is.

The baffle is one of the most critical parts of any saxophone mouthpiece since it is where the air first enters the mouthpiece and is the section that is directly behind the tip of the reed or the inside of what is called the beak. The baffle is what really creates the basic sound produced by a saxophone player. Many players prefer a straight baffle type of design, and most really good mouthpieces have a flat spot for at least part of the baffle. The baffle is what more or less shapes the tone.

There are many brands of mouthpieces, and some of the best mouthpieces ever made are not made anymore or are no longer made of the same material or do not have the quality of older, more vintage mouthpieces. Many professional saxophonists choose to have mouthpieces customized or re-faced by a skilled expert.

Your choice of the mouthpiece will also depend on what kind of music you intend to play, for example, a classical player will not want to use the same kind or size mouthpiece that a jazz or rock player will want to play. There are metal mouthpieces, hard rubber, and plastic mouthpieces as well as other hybrid or composite materials.

The mouthpiece of choice for many, if not most jazz musicians, was a metal Otto Link mouthpiece. I played one for many years until fairly recently when I began to play a custom made mouthpiece by Ted Klum. Ted makes a fine line of hand made metal mouthpieces of his own unique design, and I find them to be preferable to anything else I have played for tenor sax. Many players liked to play Metal Berg Larsen tenor sax mouthpieces as well as dunk off.

If you are a student and want to explore the possibilities of what different types of mouthpieces can sound and feel like, I would encourage you to visit your local music store that carries various saxophone mouthpieces and try several ones in a few different categories. See what appeals to you and which ones are the easiest to play. For the most part, the metal mouthpieces may be a little more difficult to control, but it is very subjective, and you should try both metal and non-metal sax mouthpieces to see what works best for you.

This entry was posted in Instrument and tagged Saxophone. Bookmark the permalink.